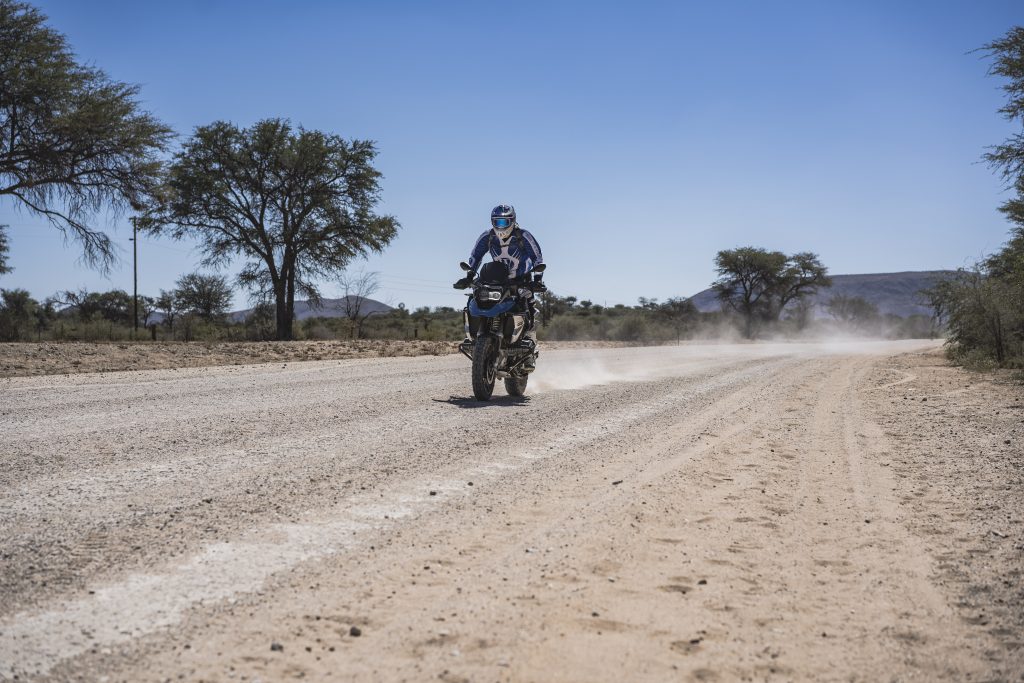 Now the time has come! As you know, yesterday I left Frankfurt for Windhoek in Namibia. Ever since I was asked if I would like to participate in this project (that was in January) I have been feverishly looking forward to this day. Accordingly, the anticipation was high 😉
At 5.30pm our tour group consisting of: Sabi, Cordi, Kathi, Zimpi, Reiner, Sascha and me met at Condor Gate 1 to check in and at 10.10 pm our plane started our journey south.  After about 10 hours of flight (with little sleep), we landed the next morning at 6.00am at the airport in Windhoek.  After going through customs, we where we were met by the AfrikaScout support crew. The three ladies with Sabine picked up our escort vehicle, loaded our gear and we drove to the hotel to meet our tour guide Gavin. As we anticipated, he is an absolutely great guy! Gavin greeted us warmly after our arrival and showed us directly our motorcycles, with which we would ride the next 12 days across Namibia.  An F 850 ​​GS, two R 1200 GS LC Rallye, one R 1200 GS LC Adventure and one R 1250 GS were waiting for us perfectly prepared (of course with Wunderlich components 😉).

It quickly became clear that the first day would not be very relaxing.  The plan included 350 kilometers from Windhoek to the Kalahari Desert.  Now normally,  350 kilometers is not a problem, but we were not in Europe anymore. The planned route did not go on a nicely developed and paved highway, no, 300 km went on so-called Gravel Roads, which are comparable to very miserable construction sites in Germany. The subsoil consists solely of loose debris, gravel and dust, which of course was our view within the group.  But you would  not believe how much fun it is !! After the first few kilometers on these “roads” it was immediately clear how unique this country and this tour would be.  Warthogs, wild horses and springboks (so-called Oryx) were running across the street with whom I was honored to have  a small head to head race with . An incredible experience I can tell you and, yes, I won !!!

At our second stop, I probably experienced one of the most unreal experiences of my life so far. We stopped in a place called “Uhlenhorst”, which hardly deserves the name Village. There are a few houses in the middle of nowhere. Nevertheless, there were certainly 20-30 small children running around and a few adults. It quickly became clear that we were the attraction of the day with all our motorcycles and our “weird” clothes. Around us a large crowd of young children gathered around us. They were so incredibly friendly and open-minded and a joy to be around.  When our tour guide Gavin said that there was a small shop in the “town”, we wanted to get some drinks and food there, as we had not had time to eat before. Arriving at the store, I realized that even in the most remote areas of Namibia,  things like Coke, Smarties, Chips, etc. exist.  It’s hard to imagine, but there was only ONE water tap in this place.  Unbelievable … After we had rested a little and ate, we used the time to play with the children and fool around. I have rarely seen such happy children, all in a place where there it is simply nothing.

After this stop, we went on the last 180 kilometers to our final destination, the Auob Lodge in the Kalahari Desert. Once there, we moved into our rooms and all had dinner together. Since it is not quite so easy with the Wifi here and there was no connection in my room, I am now sitting in the courtyard to upload my blog some pictures.

I hope you liked the first report of my trip and you will continue to follow me.
Until tomorrow!