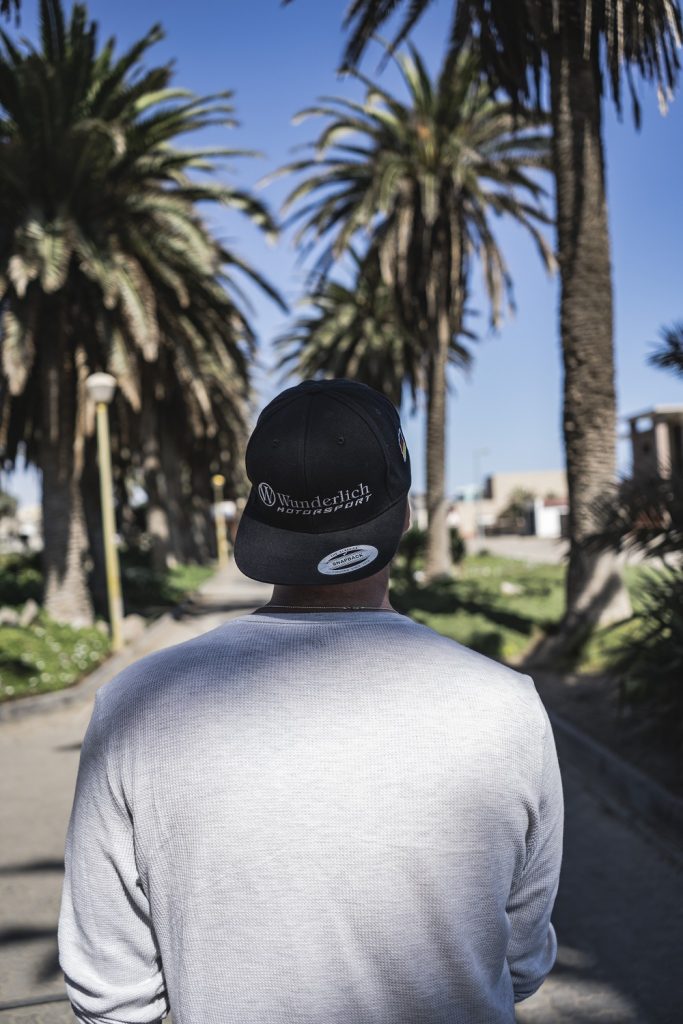 Today is Friday and it was a relaxed day in Swakopmund. Planned for this morning was a desert tour and for the afternoon free time. We were all looking forward to exploring Swakopmund by feet. But let’s start this morning:

Before it was about half past seven in the desert, I wanted to put my blog online, because it didn’t work last night. Somehow it’s really funny, every night when I try to dial in with my laptop to put the blog online, the internet connection disappears… And it’s like that every night. But hey….  This is Africa! Since I don’t want to leave you out in the cold (as far as reading is concerned), I’ve started to put my blog online before breakfast in the morning. Thus I was already 06.15 o’clock in the breakfast room, since there the connection works very well.

At 07.30 o’clock we were finally picked up by “Charly’s Desert Tours” (it was 08.10 o’clock) to see a “Living Dune” show. Here we try to show a small animal world (reptiles, insects) hiding in the desert. Unfortunately we lost valuable minutes because we were sent on the wrong tour by the provider due to a misunderstanding. He wanted to do a kind of sightseeing tour around Swakopmund with us. When we finally noticed this and we made the driver Emanuel aware of it, he changed his plan without further ado and drove with us to the start of the desert tour. There we met another bus in which there was an English couple with their driver – together we made our way to the Namib Desert. Once there, Emanuel explained to us what is important for the tour and that unfortunately one cannot guarantee to see anything, as the animals are very shy and mostly nocturnal. In the meantime the second driver set off and searched the desert for animals. Relatively fast he found two animals, which was really impressive. They were real small animals and a huge desert. But they both understood how to interpret the tracks in the sand correctly. When we arrived at the marked places we were told which animal it was. The first animal was a blindworm (most know these snake-like lizards also from Germany). Further it went to the second marked place, there Emanuel had to dig first something with the hands around this animal from his cave to get. Here hid a very pretty guy: a Desert-Gecko. This gecko cools down the whole day in his cave and comes out at night where he can use his big eyes in the best way possible. He continued his search for scorpions and snakes. After some unsuccessful stops Emanuel drove us to a small bush. There he showed us traces and told us that we should stand only directly in its proximity. No one understood why, because none of us could see anything. Even at a closer look it was impossible for us to find anything. Emanuel fetched the mobile phone of the British tourist and took a photo. He showed us a head and two eyes so perfectly camouflaged in the sand that it was impossible for us to see them. After Emanuel showed us exactly the spot, some people haven’t seen it yet. Simply unbelievable what nature has done there again. After we had annoyed the little guy enough, we continued our search for bigger snakes and scorpions.

Unfortunately we didn’t find the same one anymore, but as I said before, these animals seek shelter under the sand and the warmer it is, the deeper they go. Too bad, but this is nature. But what we still find were birds and here I could live up to my reputation as a bird whisperer again. These birds are eating out of my hand, that was a really nice moment too! After the birds Emanuel led us to the last place where he showed us an animal which I already know too well from my time with the German Armed Forces in Afghanistan. Here it is called “sand spider”, I know it as “camel spider” and I really don’t like it. A cross between a spider and a scorpion, which hisses when pressed, can jump very high and run after you to find shelter from the sun in the shade. All in all this animal is my personal nightmare 😀 Luckily it was just a baby spider we found… From there we went back to the hotel where we left our things and went on to the city. There Sascha and I wanted to stroll a bit, buy our girlfriends a little something and have a nice time.  From the hotel we first went to a pastry shop (on the way there a comoran was hit, which Sabine started with the help of two locals to take care of in a care station healthy again) there we strengthened ourselves with a kind of pâté (really very tasty – puff pastry with minced meat in it). We went on towards the beach to enjoy the sun. It’s really hard to understand when you’ve been driving through the desert for a long time and now you’re standing on a really nice beach and the life around it reminds you of holiday resorts in Europe. Nevertheless, Swakopmund exudes a charm of its own with the beautiful architecture of the colonial times. After walking through Swakopmund and the shops for about three hours, we took a break for a nice coffee. There we met again a somewhat older couple, who also comes from Germany. After a short time it turned out that the two of them came very close to my workplace. Namely from Bonn, crazy, but so small is the world!

Back at the hotel, Gavin explained to us that the radiator of Sascha’s motorcycle is defective. The motorcycle is currently being repaired in a workshop right next to our hotel and we can pick it up tomorrow morning around 09.00 o’clock.

And now it’s back to Kücki’s pub for dinner! Therefore I wish you a nice evening and have a lot of fun reading. Hopefully until tomorrow. Sabine is of the opinion that we will probably have no Internet at our next stop. But we will find out 😉