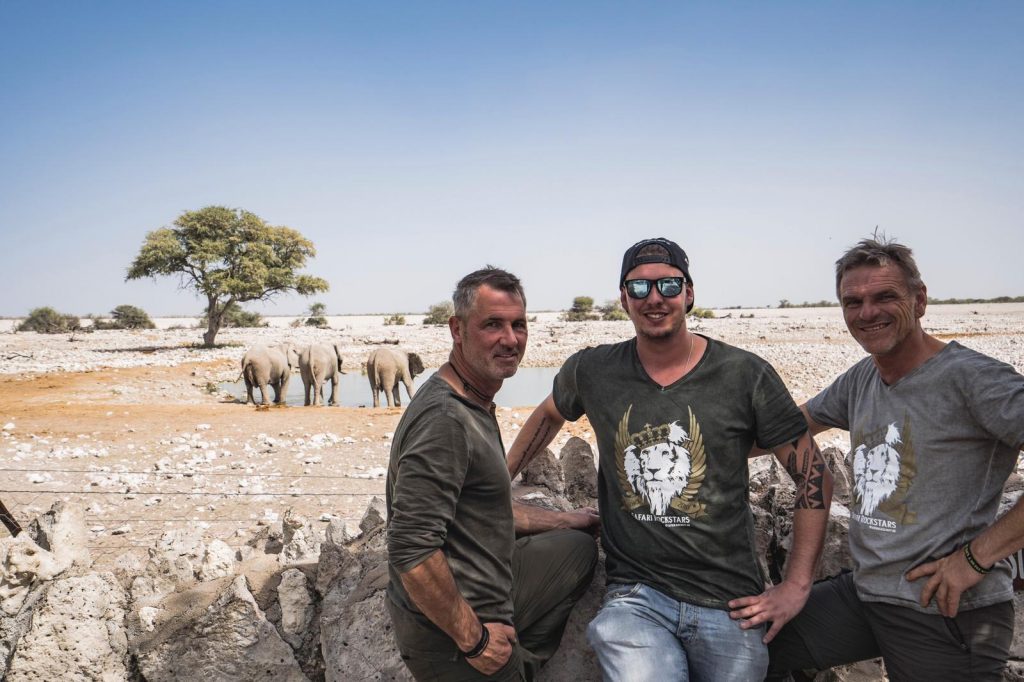 This morning you should have seen us… Apart from Reiner, Zimpi and Cordi, we are all more or less connoisseurs of what most mortals call sleep :-P. However this morning at 06:30 AM we went on safari to the well known Etosha National Park. As a result we had breakfast at 06:00. which meant we had to get up at 05:00 AM.  This was not easy for the ones mentioned above! In the early morning hours most us were still a little contaminated , if you know what I mean 😉.  But, how often in life do we have the opportunity to observe, photograph and film the animals we all know from the zoo in their natural habitat ? The answer is very rarely… for such a unique opportunity one is quite willing to torture oneself and get out of bed in the morning – and believe me, this comes from someone who gets out of bed with great diffulty in the morning! Anyway, at 06:30 we got on the safari vehicle and headed north to the park. We arrived here around 07:00.  Seeing that the gates only open around 07:15, Sabi, Zimpi and I enjoyed a cigarette before we confront all the wild animals (including predators) in the park. Then we entered the Etosha National Park. Our driver, “Lester”, lined up behind ten other safari vehicles and we followed the convoy. After a short time it became clear to us that our journey would probably not be a relaxed ride due to the road conditions and dust we experienced enroute. At the start of our safari, our driver didn’t seem too keen to be the leader of the pack and we ended up following all other safari vehicles to the waterholes. Here we saw countless springbok, oryx, kudu, zebras, ostriches and warthogs. Unfortunately there were no signs of any of the Big 5 yet. After a few hours on safari nothing changed. So, we decided to have a lunch break in Okaukuejo. Near the camp there is a waterhole and we decided to patiently sit down and observe the spot. Lester told us that we would rest for an hour at this place. After about 30 minutes something happened that none of us would have expected … Three elephants trotted in the direction of the watering hole in a very relaxed manner.  This resulted in all the other animals left to observe matters from a distance. After about 15 minutes another elephant joined them and for a short time and left us with the impression that there could come a fight right away. Two of the giant pachyderms threatened each other to scare the other away from the waterhole. But in the end all four elephants stayed there and peacefully drank water together. When it was time for us to go, our driver came running and told us that he had just received a call and that a rhino had been seen at a waterhole about 15 minutes away. Of course it was immediately clear to us what a rare opportunity we had (rhinos are extremely endangered and every rhino in Etosha National Park has rangers who take care that nothing happens to the animal). So we got into the car as soon as possible and Lester stepped on the gas and that is to be taken literally. In contrast to the morning he didn’t want to waste any time showing us a rhino and he made it. When we arrived here this breathtaking animal was still drinking, surrounded by ostriches and vultures. It was really very nice to observe such a rare animal. On the way back to the lodge we also got the chance to see the next member of the Big 5. In about 200 meters distance we could see lions lying in the shade. Unfortunately the distance was too great to take any nice pictures. With this beautiful sighting at the end of our journey we finally went back to the lodge, where I could lie down for the first time on this trip at the pool and process all we experienced this far. Now, I just came to my bungalow to write the blog for you. Unfortunately I have to hurry a bit, because I still have to take a shower and with Gavin I change the windshield on my GS. For the tour tomorrow I’m assembling the Wunderlich Marathon windshield to have optimal wind protection on the 450 km long trip. I would like to make the last kilometres of the ride as pleasant as possible 😉

Tomorrow you’ll find out how I’ve been on the road. Sven

The “Rhino Ride” is an animal welfare project to protect the rhinos in Africa. We were invited by André Barnard Jr. and our tour guide Gavin. Every year, they take a tour through Germany, Austria and Switzerland to present their project to Tour-Operators so that they can pass on the importance of protection and conservation to their customers.  As I have just told you, these animals need extreme protection and both of them make sure that the donations collected during this trip reach the right places. For example a drone project in Namibia has already been supported with the collected donations to prevent poachers from killing or injuring these beautiful pachyderms. In South Africa, rangers are supported to guard the last rhinos day and night with the assistance of well trained dogs. If you are interested in donating something, please contact me and I will get in touch with Gavin! Every € helps the animals and also us, so that we can admire these rhinos in their antural habitat and so that our children and genrations to come enjoys the same privilidge!!