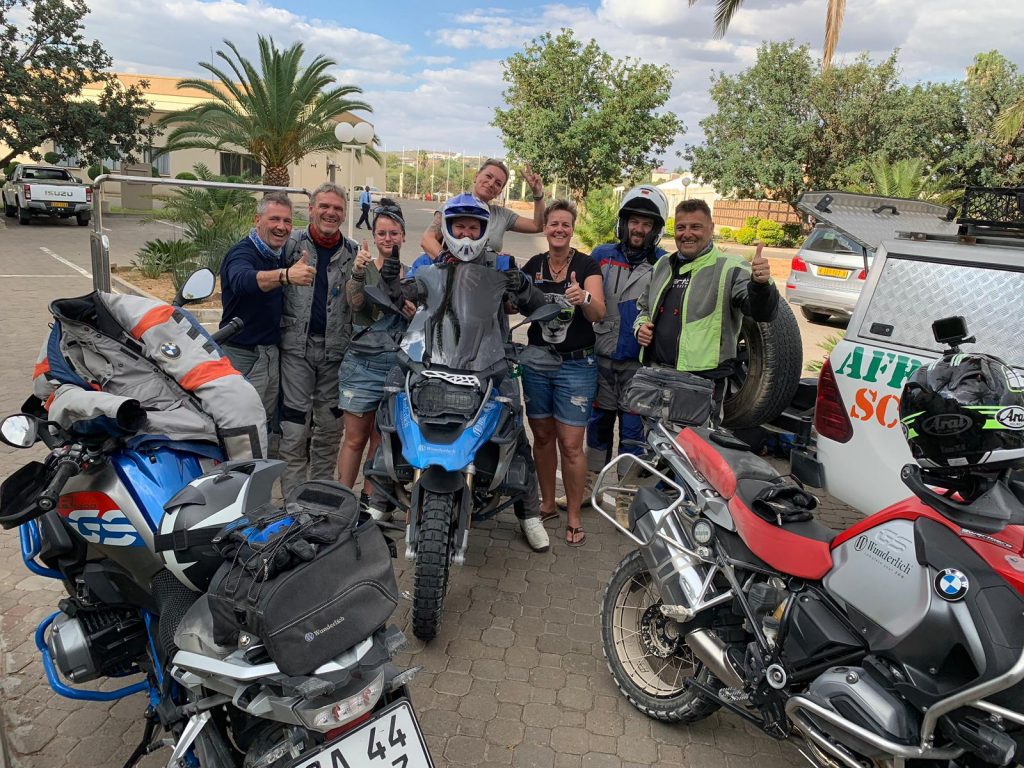 As it is usual on motorcycle journeys, the last riding day as come today with our motorcycles. From the Etosha Safari Lodge we drove about 450 km back to Windhoek to the Safari Court Hotel. In order to arrive as early as possible, we wanted to start around 09:00 am. Well, as it was usual in our group, we didn’t start until 09:20… Reiner and Zimpi started as usual about half an hour before us. When Gavin, Sascha and I drove away from the reception of the lodge, we didn’t know what would happen to us two minutes later. On the way to the entrance gate of our hotel a huge giraffe suddenly stood in a bend and was enjoying his meal. Gavin had to make an emergency stop to avoid an accident. The giraffe was apparently more frightened than we were and sprinted about two meters in front of our guide across the road and ten meters into the bush. From there she watched us closely and stood still. When Sascha went into the bush to photograph the giraffe, she turned around and ran away. It was kind of funny, on the safari we had a lot of problems seeing animals at all and when it was a giraffe, it was about 100 meters away, so it was really extraordinary what happened to us there. One of the most beautiful moments on this trip!

After we could get rid of the giraffe, we went out on the road (today for the first time only asphalt was on the agenda) to unwind the 450 km in front of us. Unfortunately, I have to say, it was a little bit boring because it went almost only straight ahead and in the bush left and right and little happened. Here and there were farmers with his cattle or goats, or also sometimes the one or other warthog and above all the very carelessly acting chickens (unfortunately I cannot tell you what the exact name of the animals is), which run very gladly on the street, no matter whether there is just a truck, car or motorcycle. Fortunately we didn’t run over any of them. Shortly before Windhoek the baboons wanted to say goodbye to us. It’s hard to believe how many of these monkeys are sitting at the roadside of the highway and are occupied with their fellow monkeys. A miracle that nothing happens here. But it was still very nice to see some monkeys on this tour.
We arrived in Windhoek and everything got really busy, because Gavin wanted to set off still today in the direction of his homeland. Since he has to go to Cape Town and has about 1500 km ahead of him, he tried today to drive to the border, to take a break there, to be able to continue tomorrow morning without traffic. So, us four guys got everything off the motorcycles we had to bring home and loaded the motorcycles onto Gavin’s trailer.

That 2 weeks went really fast.  After a short farewell with Gavin (he got some surprises from us) could set off fast towards home. At this point I would like to thank Gavin again very much for his great work on this tour! It was a pleasure for all of us to be able to do such a tour with such a calm, down-to-earth and nice person. Gavin, stay as you are!!

After we said goodbye to Gavin, we went to our rooms to change our clothes and freshen up, because Sabi had ordered two taxis for 19:30 o’clock, which took us to Joe’s Beer House. Everyone who is in Windhoek should stop by there! A very nice restaurant and bar, with great music and nice atmosphere. We spent our evening there but finished up earlier than expected (we were really all very tired after the tours of the last days), were at 23:30 o’clock again in the hotel and went to bed.

Tomorrow, Wednesday, you probably won’t hear from me, because we’re going home. But I’ll get back to you as soon as I’m home. Sven

On today’s track only asphalt was on the agenda, so I mounted the marathon disc and it did its job impressively. No turbulence, no loud wind noise and a pleasant airflow behind the screen. Try it yourself, especially on long rides and as protection from the weather an absolute enrichment for the bike!