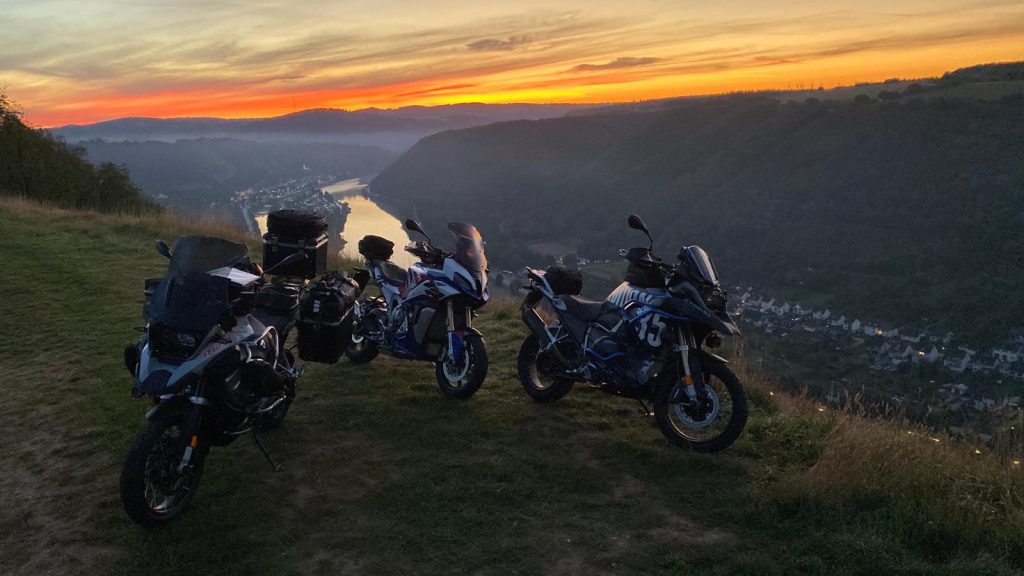 as late as it went to bed on Monday, as early as Tuesday morning I went out again. I’m honest, even getting up 8 o’clock is way too early for me, but this morning at four o’clock the alarm clock threw me out of my bed. But it was worth it!

After I had picked up our photographer in the hotel, I went to the southern edge of the Eifel. The first shooting spot was a paraglider starting point above the Mosel. After we arrived, the sun came up soon after and the tiredness was gone. The first rays of sunshine not only warmed up the foggy Mosel valley, but also our minds!

After the “morning charm” after sunrise was in the can, it was downhill for once! We rode to nearby Cochem. The quote was: “If we are shooting in the Eifel, then we have to go to Cochem too! 😀 Said so and so we threw ourselves into the traffic chaos of the wine village. …but even that paid off!

After a small breakfast in Cochem we went to Mendig for the first time on Tuesday. Here we took some very charismatic pictures in the “Old Fort” (abandoned deposit from the first world war). A little bit of action was also there. 😉

Meanwhile we had well after noon and we went back to the Grafschaft to the office. After a short breather and a change of motorcycle and clothes we went back to Mendig, and this time to an absolute highlight!

The airfield in Mendig. Actually, I could write my own blog about these two hours alone. What we experienced, saw and shot there! The 1.7 km long and 36 m wide runway gave us the chance to really let off steam. So far I could only take a quick look at the camera screen and tell you: Be curious! I have seen such amazing pictures, it is just something different to shoot on an airfield.

While I’m writing this blog, my 19th hour on my feet has just begun, but every minute today was worth it! With this in mind: A big thank you to the whole team of the airfield Mendig and especially to the team of [hangar|zero], who supported us with spectacular pictures.